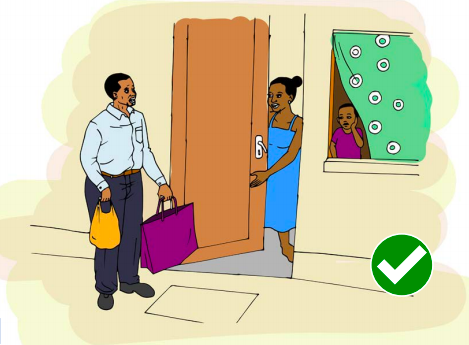 Parents should make agreements on child support and, for the best interest of the child, support the other parent where needed

Both parents are responsible for costs of upbringing the child such as school fees, food, clothing and other expenses. It is important for parents to agree on child support. Parents should also be willing to support their children outside these agreements. Occasionally, children might need more food, clothing or other items than expected. Research shows that providing formal and informal child support benefits the wellbeing of children. Formal child support includes mutually agreed arrangements on financial contributions towards the costs of children. Informal child support may include other things from providing food, shelter, clothing, emotional support etc.

Uganda Constitution, Article 32 Clause 4 Both parents are responsible for the upbringing of children and the costs related to this.

Consider all options. Non-monetary contributions should be considered, not just financial agreements. These may include spending time with house chores, support with homework, moral upbringing or other forms of support for children.

Both parents should be involved in the moral education of children. Both parents each play an important role in children’s development, even after separation or re-marriage.

Children might need a guardian. There may be cases where a parent is not in the picture. A guardian could be responsible for the upbringing arrangements for children.

During the orientation process of the available literature, we were able to identify three interventions, these being:

For the purpose of this PICO question we compare providing formal and informal support with only providing formal child support by the non-residential parent. Research shows that nonresident fathers provide a considerable amount of in-kind support instead of cash support (Greene & Moore, p. 174).

With regards to the third intervention (i.e. not paying child support), research shows that nonresidential fathers’ support not only increase children’s standard of living, but also improve children’s health, educational attainment and general well-being (Amato & Gilbert, p. 557-558; Garasky et al, p. 365). Providing child support would therefore be clearly desirable over not providing for child support. For this reason we do not test this intervention.

The main sources used for this particular subject are:

Waller and Plotnick analyse findings from qualitative studies to understand why the child support system is ineffective for many low-income families. Amato and Gilbert use meta-analytical methods to explain how dimensions of the non-resident father-child relationship are linked with children’s well-being. Nepomnyaschy’s study examines the relationship between child support payments and fathers’ contact with their nonmarital children. Greene and Moore use descriptive data to research factors that predict father involvement among non-resident fathers of young children who receive welfare and whether nonresident father involvement is associated with better outcomes for these children. Garasky et al investigate the relationships among three aspects of father involvement namely, child support, in-kind support and visitation. According to the HiiL Methodology: Assessment of Evidence and Recommendations, the strength of this evidence is classified as ‘moderate’.

Mothers who receive formal and informal support from fathers report fewer behavioral problems and higher levels of social and emotional adjustment for their children (Greene and Moore, p. 175).

Regarding the well-being of children, both formal and informal child support are positively associated with better ratings on the Personal Maturity Scale (an outcome variable used in this research, which focuses on the child’s emotional and behavioral development) (Greene and Moore, p. 175). Informal child support is associated with improvements in the child’s home environment (Greene and Moore, p. 176). Over time, informal support from the father may be associated with improvements in cognitive assessment scores and academic achievements for children.

Fathers who pay child support may want to see their children more, in order to oversee the allocation of their contributions (Nepomnyaschy p. 94). A stronger positive relationship exists between visitation and support provided by a nonresident father when that support is made informally to the child’s mother (Nepomnyaschy, p. 94).

Child support seeks to ensure that parents who live apart from their children contribute to their financial support in order to achieve specific goals such as poverty and financial insecurity reduction among children and their custodial parents. Child support also seeks to affirm the widely held belief that parents are morally and socially obligated to support their children (Waller & Plotnick, p. 89).

Child support is thought to have symbolic meaning, representing the non-resident parent’s care and concern to the child; and this may improve the child(ren)’s well-being beyond the effects of raising the child’s standard of living, to a psychological contribution (Garasky et al, p. 365).

Mothers mention that conflict may arise when the father begins to pay child support and stop supporting them informally or doing the “extras” for their children (Waller & Plotnick, p. 101). Moreover, these conflicts can make already difficult parenting arrangements more hostile and may lead to their dissolution (Waller & Plotnick, p. 99).

After low-income parents become involved with the formal system and a support order is established, concerns about how the system enforces support orders arise. Mothers often perceive it as ineffective in enforcing their rights to support. Fathers become frustrated with the system’s insensitivity to their changeable economic circumstances and its use of criminal sanctions to enforce compliance. These perceived problems with the enforcement process are likely to contribute to poor parents’ reluctance to participate in the formal system in the first place (Waller & Plotnick, p. 101).

Although some parents sometimes did not comply with child support regulations, these studies suggest that they strongly endorse the belief that fathers have an obligation to support their biological children and be involved in their lives. All studies indicate that communities recognise in-kind contributions such as diapers, toys, clothing and shoes as valid expressions of this paternal obligation (Waller & Plotnick, p. 100).

Taking into account the clear balance towards the desired outcomes, and the strength of the evidence, we make the following recommendation: Receiving both formal and informal child support is more effective than receiving only formal child support.