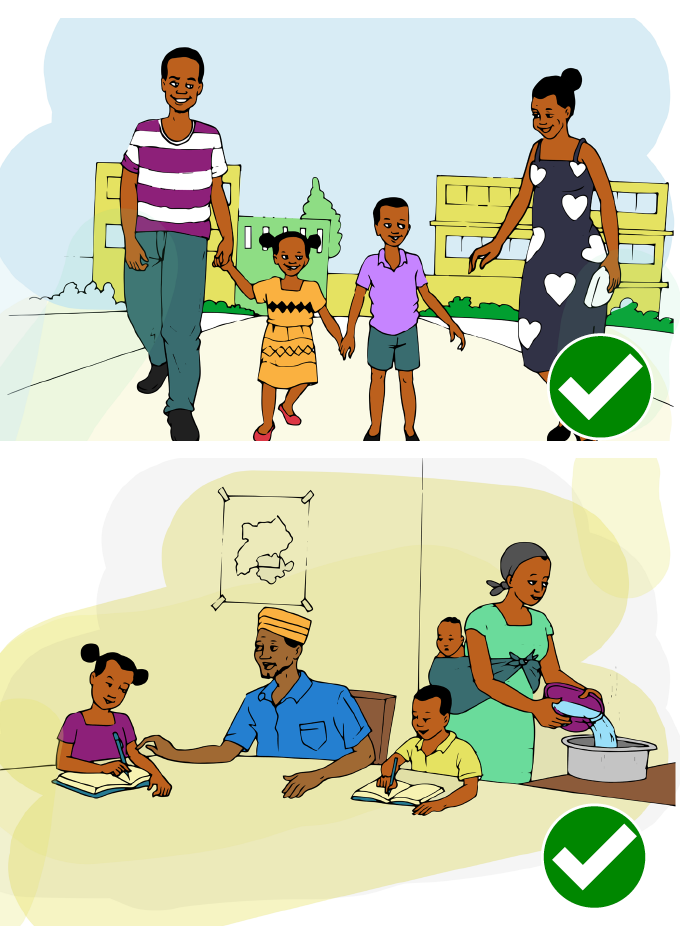 Parents should love and nurture their child, at the same time they are demanding and in control

Parents should have high levels of control and maturity demands over their children, combined with high levels of nurturance. This means that they show warmth, support, effective monitoring, control, discipline, positive discussion and responsiveness to their children’s needs. Parents rely on positive sanctions to gain their child’s compliance and encourage their child to express himself when he disagrees. This is referred to as ‘authoritative parenting’. According to international research, authoritative parenting plays an important role in children’s academic performance.

There are 3 types of parenting that have been shown to have different effects on the wellbeing of children:

Authoritative parenting – Where parents have high demands from their children but are also loving and nurturing their emotional needs. This is seen as the most effective type of parenting.

Permissive parenting – Where parents show love and care towards their children, but not give enough direction and guidance.

Authoritarian parenting – Parents are strict and demanding but are not supportive enough of the children’s emotional needs.

Parents shouldn’t favour children. Both girls and boys should be equally loved and supported by both parents.

Make sure that girls and boys are treated equally. There should be no discrimination in assigning resources and responsibilities to them, or in reprimanding them.

Take time to understand the needs of children. Parents should make sure they understand their children’s needs and provide for them.

Make sure children are consulted about their education. Make sure they are safe and comfortable in their schools.

Try to learn more about parenting skills. Ask others to find out if there are resources that can help you to learn about good parenting. These could include radio broadcasts, books or gatherings.

During the orientation process of the available literature, we were able to identify three interventions, these being:

Authoritative parenting is characterised by having high levels of control and maturity demands, combined with high levels of nurturance. These parents rely more on positive than negative sanctions to gain their child’s compliance and encourage their child to express himself/herself when the child disagrees (Handbook, p. 452).

Authoritarian parents display high levels of control along with low levels of clarity and nurturance. These parents rely on power-assertive forms of discipline. They are less likely than authoritative parents to provide reasons when attempting to alter their child’s behaviour and discourage expressions of the child’s disagreement (Handbook, p. 452).

Permissive parenting is characterised by parents who display low levels of control and maturity demands, combined with higher levels of nurturance. They are less likely than authoritative parents to enforce rules or structure for their child’s activities (Handbook, p. 452).

For children, is authoritative parenting more effective than other forms of parenting, for their well-being?

The four main sources used for this particular subject are:

These sources are largely based on an RCT and several observational studies. According to the HiiL Methodology: Assessment of Evidence and Recommendations, the strength of this evidence is classified as ‘low’ to ‘moderate’.

Children of separated parents benefit the most when their father is actively engaged in their lives across a wide range of daily activities and when he has an authoritative rather than permissive or authoritarian parenting style (Nielsen, p. 591)

Children are less depressed, were less aggressive and had higher self-esteem when both parents are authoritative (Nielsen, p. 599)

Children with at least one authoritative parent have been linked to better academic competence and higher grades (Fletcher, Steinberg and Sellers p. and Dornbusch et al., p. 1256)

Children from parents applying an authoritative parenting style do better at school compared to the other parenting styles (Dornbusch et al., p. 1256).

A consistent and authoritative parenting style is effective (Afifi, p. 751). Parenting characteristics such as supportiveness and warmth continue to play an important role in influencing a student’s academic performance (Turner et al., p. 343).

Parenting characteristics such as supportiveness and warmth continue to play an important role in influencing a student’s academic performance (Turner et al., p. 343).

The balance of outcomes is in favour of an authoritarian parenting style.

Taking into account the balance of outcomes, the high effect on children’s well-being and the strength of the evidence, we make the following strong recommendation: For children, authoritative parenting is more effective than other forms of parenting for their well-being.