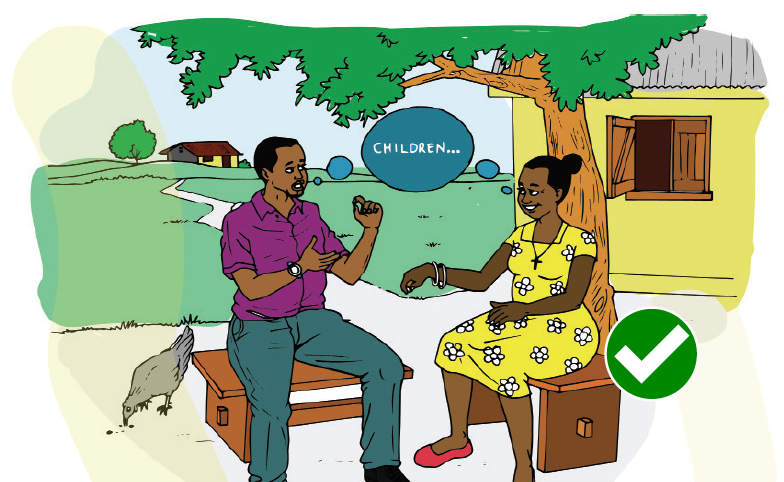 Parents should communicate and cooperate with each other

They should try to interact, communicate and cooperate with each other. Communication is essential in order to transform and adapt to a new situation.

Parents should decide together on how often they interact or communicate about their children’s needs. Parents can discuss child-related issues in person on arranged times.

Examples of items to be discussed are:

Communicate at agreed moments. Parents should make a plan to speak about their problems face-to-face at specific moments, rather than reacting emotionally to things as they happen.

Use positive (body) language. Parents should not be aggressive or defensive in the way they communicate. They should be open and honest about their emotions but do it in a constructive way.

Show respect. The parties should make each other feel respected in order to be able to effectively communicate.

Where appropriate, make sure there is eye-contact – In some cultures, eye-contact encourages truth and understanding.

During the orientation process of the available literature, we were able to identify the following interventions:

For the parents and children, is mutual constructive communication between parents more effective than mutual avoidance for their well-being?

The main source used for this particular subject is The Handbook of Family Communication, edited by Anita L. Vangelisi. Three chapters have been used in particular, these being:

Diamond and Brimhall, Communication During Conflict: Differences Between Individuals in First and Second Marriages (2013)

The Handbook of Family Communication presents an analysis of cutting-edge research and theory on family interaction. It integrates perspectives of researchers and practitioners. Chapter 9 is mostly based on large-scale observational studies, and a few meta-analyses that help to understand what happens when families separate. Chapter 13 and 19 mostly rely on observational studies. Evidence can be regarded as being low to moderate.

Communication between parents becomes more difficult and energy consuming after separation. Unexpected and overwhelming demands after separation results in less communication by the parents. Parents will need to communicate more often and effectively, so that the parenting styles of both parents are consistent (Handbook, p. 204). Research shows that mutual constructive communication is generally designated as the healthiest, most functional interactive pattern. Separated parents must be willing to interact, communicate and cooperate with each other regarding child-related issues, despite any feelings of rejection, remorse, bitterness, or anger. This is because parental responsibilities after separation continue to exist, and communication is essential to transform and adapt to accommodate to parents’ new roles (Handbook, p. 204).

The ability of separated parents to co-parent together, communicate about their children, to cooperate to set limits, to problem solve effectively and to provide consistent positive affective messages has a major influence on the ability of children to adjust after separation (Handbook, p. 205).

Both avoidance and demand/withdrawal communication are correlated with lower relationship satisfaction (Bodenmann, p. 354).

between parents is more effective than mutual avoidance, for their well-being, the desirable and undesirable outcomes of both interventions must be considered.

The literature suggests that mutual constructive communication between parents is in the interest of the child. On the other hand, mutual avoidance and demand/withdrawal communication are correlated with lower relationship satisfaction and a lack of ability to move towards a resolution.

The balance is clearly towards the desired outcomes of mutual constructive communication.

Taking into account the balance towards the desired outcomes, the effect on children’s well-being and the strength of the evidence, we make the following recommendation: For the parents and children, mutual constructive communication between parents is effective than mutual avoidance, for their well-being.