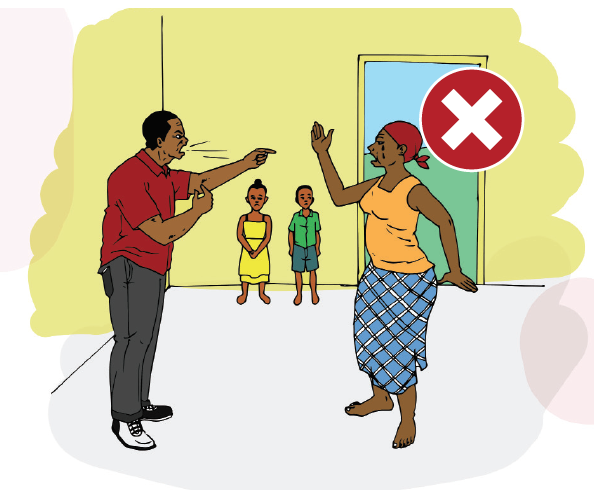 SASA! challenges individuals and communities to think about their power and how their use of power affects their intimate partners, as well as their interactions with other community members.

The acronym (SASA) represents the four phases of the intervention activities that is:

Continuously raising awareness on domestic violence: The awareness usually entails topics on what constitutes domestic violence, its forms, cause, effects, magnitude, how to live non-violent lives and support services available. The awareness is usually conducted in the local language by local council leaders, community volunteers, social workers, lawyers and community development workers, in both informal (under a tree or community meeting place) and formal settings (organised in form of a workshop) within the community.

Creating awareness on domestic violence is more sustainable when the capacity of community structures such as local councils is strengthened to own and continue the initiatives. Therefore, the awareness is done in conjunction with local leaders who not only mobilize the community but also speak about pressing issues in the community.

Using hotlines/helplines that provide immediate support to victims: Helplines were especially useful during the COVID 19 lockdown when most support services were closed or scaled down. Helplines play a great role in providing information on domestic violence, referrals and address accessibility and safety challenges since the victim does not have to move from their home. The call can also be made by a neighbour upon hearing or seeing abuse happening in his or her locality.

Community policing initiatives that entail community mobilization and raising awareness on domestic violence: These initiatives are led by the police and conducted in collaboration with other actors such as local councils, probation and social welfare officers or community development officers and non-government organization or community-based organization workers. The community is usually mobilized to participate by the Local Council One (LC1) Chairperson. During the sessions, the different actors including the LC1 Chairperson talk about domestic violence as a crime, explain the protections under the law, their roles with emphasis on the role of the police and how victims can access the available support services. They also implore every community member to be each other’s keeper. Community policing sessions are conducted informally usually under a tree or in a community hall, they put every community member on high alert to report domestic violence.

Having influential community members such as religious and cultural leaders take the fore in raising awareness on domestic violence: This enhances the community’s ability to reflect on the issue and to act, it also influences victims of domestic violence to report. For example, the campaign by the Nabagereka (queen) of Buganda kingdom about peaceful homes during the COVID 19 lock down when cases of domestic violence were on the rise.

Awareness raising on domestic violence aimed at both prevention and disclosure

Awareness raising on domestic violence can take the form of publicity campaigns, use of mass media such as messages on radio and television, posters, brochures or other communication materials, messages on billboards, awareness sessions with different groups in the community, etc. This intervention was chosen because it is one of the most common domestic violence interventions [on the African continent], sometimes implemented as a standalone but often as a component of a broader programme. Additionally, awareness raising has been noted to have the ability to disrupt the different pathways and contexts that lead to perpetuation of domestic violence and other forms of gender-based violence (Heisecke, 2014).

Key messages on domestic violence include:

Awareness raising campaigns are said to impact on reporting. An evaluation study of domestic violence interventions in the United Kingdom revealed that more individuals reported cases of domestic violence during the time the awareness campaign was running than at any other time (Hester and Westmarland, 2005).

SASA! is a community mobilization intervention that aims at changing community attitudes, norms and behaviors. SASA! challenges individuals and communities to think about their power and how their use of power affects their intimate partners, as well as their interactions with other community members (Watts et al, 2014).

SASA! is a phased approach designed around the ecological model of violence, it recognizes that domestic violence is a result of an interplay of factors that operate at the individual, relationship, community and societal levels, and that if any meaningful change is to be achieved, interventions must target and systematically work with a broad range of stakeholders within the community (Watts et al, 2014).

The acronym (SASA) represents the four phases of the intervention activities that is:

This intervention is chosen because of its focus on the root cause of domestic violence, ability to change individual and community attitudes, behaviors and norms that perpetuate this violence and the possibility to adapt it to specific contexts for example SASA! Faith that is being used in religious communities to prevent violence against women (Watts et al, 2014).

For victims of domestic violence to disclose or report, is the SASA! community mobilization intervention more effective than awareness raising on prevention and disclosure, for their safety and wellbeing?

The databases used are: JSTOR, ResearchGate and SAGE.

The main sources of evidence used for this particular subject are:

The SASA! study by Watts and others was conducted between 2008 and 2012 in two administrative divisions of Kampala (Makindye and Rubaga). It incorporates four elements: a cluster randomized controlled trial; a nested qualitative evaluation; operations research; and an economic costing of the intervention. The study was conducted in eight communities, comprising 12 parishes, in two administrative divisions of Kampala District – Makindye and Rubaga, neither of which had had any prior exposure to SASA! These communities contained approximately 66,500 households and 251,500 inhabitants. According to the HiiL guideline approach this is grade as high.

The study by Raghavendra and others helps close gaps in the evidence related to interventions aimed at reducing domestic violence.  Domestic violence in Andhra Pradesh costs the state an estimated 1.8% of GSDP, or INR 13,000 crore per year. The study looks at two interventions with a strong track record internationally. The first is based on the SASA! project, a community mobilization intervention seeking to change the norms and behaviors that result in gender inequality and violence, pioneered in Uganda and used in more than 20 countries. The second intervention, used in South Africa, combines microfinance with training about domestic violence, gender norms and sexuality, thus providing women with the means and knowledge to improve their well-being. According to the HiiL guideline approach this is graded as high.

The article by Heise is a review of empirical evidence of what works in low- and middle-income countries to prevent violence against women by their husbands and other male partners. The purpose of the report is to inform the future direction of DFID programming on violence against women with an eye towards maximizing its impact and ensuring the best use of scarce resources. The review focuses on efforts to prevent partner violence, rather than evaluating services that are available for victims. In focusing on prevention rather than mitigation or response, the review concentrates on interventions designed to reduce the overall level of violence in the medium to long term, rather than on interventions to meet the immediate needs of victims. This shifts the focus of inquiry away from interventions designed to improve services towards programmes and policies designed to influence the underlying determinants of partner violence. Finally, the review prioritizes programmes that have been evaluated using rigorous scientific designs, emphasizing formal impact evaluation. According to the HiiL guideline approach, this is graded as high.

Most findings used in this PICO question are based on reviews, program evaluation and assessments and empirical studies. One study however, is based on expert opinion. This classifies the strength of the evidence as low according to the HiiL methodology: Assessment of Evidence and Recommendations.

Awareness raising focused on prevention and disclosure can result in better protection for victims. Awareness raising helps to break the silence on domestic violence and to lay a basis for advocacy for policy reform and implementation (Heise, 2011), which in the long run may result in better services and protection for victims of domestic violence. At the community level, SASA! helps foster a climate of non-tolerance of violence against women, by reducing its acceptability and improving individuals community members’ skills, willingness and sense of responsibility to reduce violence against women in their communities. An evaluation study of SASA! illustrated that a focus on power imbalance is a useful strategy, which supports increased engagement by men (Watts, 2014).

SASA! helps to develop and improve formal and informal community-based support mechanisms and services for victims. The SASA! strategy is also used to initiate discussions about what men and women can do to prevent violence in their own lives and in the community (Watts, 2014). This creates a conducive environment for victims of domestic violence to seek help and be supported.

SASA! tackles individuals’ risk of experiencing or using violence, as well as the norms, beliefs and social and economic contexts that create the conditions under which domestic violence occurs (WHO and London School of Hygiene & Tropical Medicine 2010; Heise, 2011). This has a direct benefit to individual women whose experience of violent relationships may be transformed to non-violence because it equips them with skills to reduce gender inequities and to challenge and respond to violence in their personal relationships and the community. (Abramsky et al. 2012).

Awareness raising as an intervention is not comprehensive enough to adequately enable disclosure and reporting of the victim. For awareness to effectively improve the wellbeing of domestic violence survivors it must be part of a comprehensive domestic violence strategy that addresses the root cause and provides holistic support for victims when they disclose their experiences of violence or report (Heisecke, 2014).

The existing knowledge base on how awareness raising contributes to disrupting pathways that perpetuate domestic violence is limited and existing research on people’s willingness to act as a result of awareness creation is mixed (Heisecke, 2014). SASA! requires high levels of commitment by community members and may be affected by community members’ mobility from one community to another and any other factors that may hinder community members from congregating. (Watts, 2014)

Awareness raising is limited in its ability to facilitate disclosure and reporting by a victim of domestic violence given that it usually does not engage deeply in social norm change to create the required change in attitude and perception.